Our Wednesday evening trio’s league that have been with us for the past several months have had a huge achievement this month!!! Wednesday the 4th of May 2016, Lionel Williams managed a whooping 22 strikes in a row, this started towards the end of his first game, carried on throughout the whole of the second and leading into the third.

This gave a perfect game of 12 strikes hitting the 300 club with what looked like ease!

The atmosphere of that evening was electric and many of the league players were delighted that they had witnessed the event. Lionel has been close to hitting 300 on a couple of occasions over the years but is chuffed to pieces that he has finally been able to accomplish this fantastic score. It was safe to say he left all members of the bowling league “All bowled over” by the end of the evening.

Some of the comments from the league players included:

“What a great achievement and memory to have”

YMCA Bowl are thrilled to pieces that this event has taken place within our  facilities and wonder if this is something we will see again in the future. As this doesn’t appear to be a regular occurrence YMCA Bowl has named Lane 8 after him, whist awarding him with a engraved Ten Pin Bowling trophy, certificate of achievement and a free family bowl session worth £20. 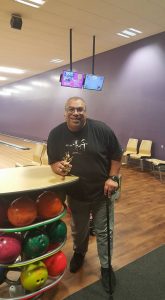